When Should You Omit A Character?

As the old saying goes, “Quality over quantity”; that is, the number of characters, or chapters, or plot lines is not a strong indicator of a good book – but the quality of the writing is everything. When it comes to incorporating characters into the plot, it’s important to determine whether their actions either help to advance the plot, influence the behavior and actions of other characters, or give the audience reading an alternative perspective of the plot.  Otherwise, the inclusion of those additional characters might detract from a clean storyline and disrupt the pacing, making the plot feel clunkier and more confusing.

Why is it important to consider omitting characters?

It’s possible that your story involves a long list of characters who are affected, influenced, and changed by the events of the plot. However, keep in mind that in order to tell any one story well, a writer needs to be able to delve deeply into the thoughts and emotions of each character – a tall task as the character list grows. Since the plot will follow a central storyline involving the main character(s), those characters are the priority, with auxiliary characters and subplots serving as a support to the storyline – their presence is, essentially, a “device” to ensure the main characters’ thoughts and feelings are expressed or known to the reader. 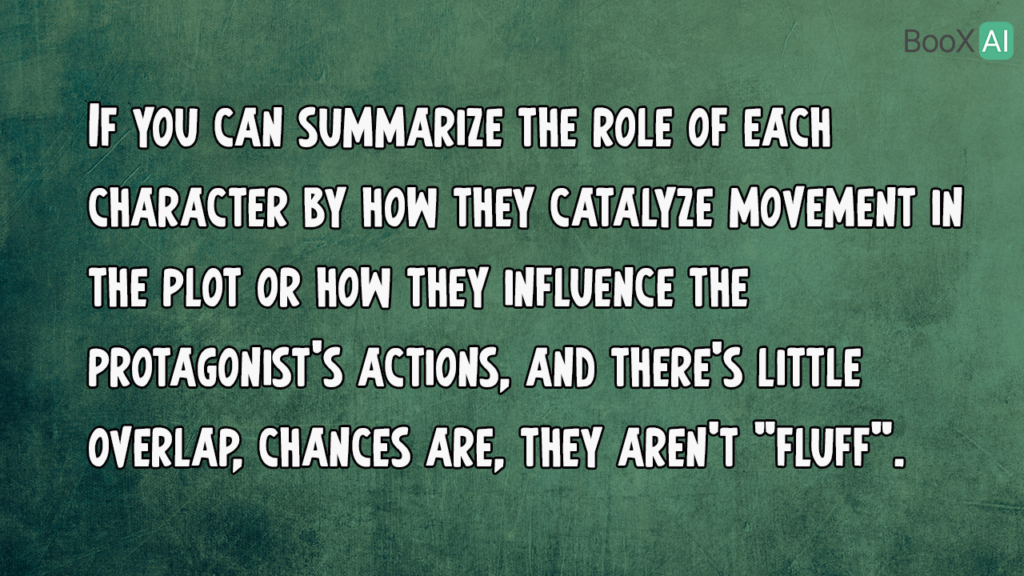 Afraid you won’t be able to tell which characters are important to your book? Your editor’s job is, among other tasks, to help you streamline the plot and make sure your book flows smoothly, so they will be able to weigh in. This is why the editing process is so important for an author. Still, a writer may be able to avoid falling into the trap of adding “fluff” by considering these questions:

Though you might still find yourself attached to a character that your editor is convinced “needs the axe,” you still have the last say as an author as to what stays and what goes. Your editor offers suggestions and professional insight meant to enhance your writing. Still, as authors and owners of your intellectual property, it is your decision whether or not to apply the editor’s suggestions. You can also consider finding a happy medium by trimming the character’s appearance in your story versus nixing them altogether, making sure each inclusion has a clear and unique importance to the central plot.

There is no proven formula for finding the right number of characters to tell a story. You, as the writer, ultimately have artistic license to add characters and subplots to your heart’s content. Ultimately, however, you will find that your story is served best when every character, every plot line – every word – has purpose.

Your information is protected by 256-bit SSL encryption